Phnom Penh: On the occasion of the 30th Anniversary of the Paris Peace Agreement, the Cambodian Ambassador to the US, Chum Sounry, has participated in an online event at the United States Institute of Peace (USIP).

During the meeting, Chum Sounry made some statements recalling the creation of the Paris Peace Agreement, starting first in 1987 with discussions between Prime Minister Hun Sen and King Norodom Sihanouk to find peaceful settlements to finish conflicts in Cambodia, leading to the first general elections in 1993 that were organized and supervised by the United Nations Transitional Authority in Cambodia (UNTAC).

The Paris Peace Agreement resulted in a new constitution, ratifying Cambodia as a Constitutional monarchy adhered to a liberal pluralist democracy. However, Chum Sounry reminded of the time when the Khmer Rouge left the agreements and kept fighting in different regions of the country. Seeing that conflicts were ongoing, UNTAC withdrew from the country after spending $2 billion for the democratic transition. With the efforts of Prime Minister Hun Sen in advancing his “win-win” policy, the Kingdom kept on track to achieve peace, resulting in a fully peaceful nation by 1998.

Chum Sounry has emphasized however that the Paris Peace Agreement had to suffer some changes when the Democratic Kampuchea DK – the Khmer Rouge faction – failed to comply with the agreement, causing dramatic damage to the conditions of the agreement, which involved plans such as the disarmament of the factions, creation of a neutral political environment, promotion of human rights, repatriation of refugees and displaced people, the organisation of an election, rehabilitation and reconstruction.

The Ambassador of Cambodia shared his idea that opponents usually invoke the Paris Peace Agreement to criticize the Royal Government, but understands that political opposition and regular discussion of ideas are natural in a democratic state. However, freedom of speech isn’t the same as freedom to defame and slander. “Yes, the space for a free political environment remains in Cambodia for citizens who do respect the law”, said Chum Sounry.

He also used the opportunity to ratify “Cambodia is well on its track since the end of the UN Mission”, respecting human rights, for example, not just to follow the Paris Peace Agreement criteria. According to the Ambassador, the government is conducted “by virtue”.

Chum Sounry showed how the living conditions of Cambodians has improved with the poverty rate lowered from about 53.2% in 2004 to 13.5% in 2014, and expected to continue lowering to around 10%. 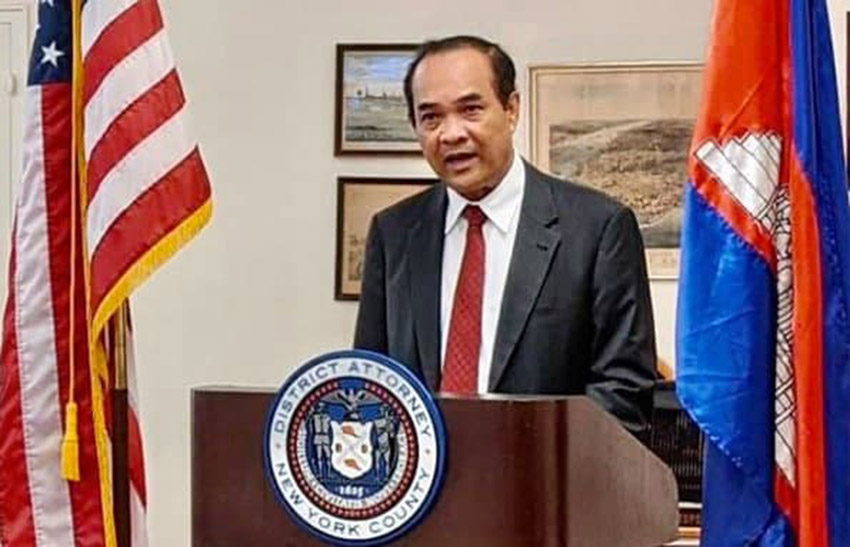