UNICEF Say Cambodia Has Made Progress in Combatting Violence Against Children

PHNOM PENH: A new independent evaluation recognizing Cambodia's progress on tackling violence against children was released on Friday, 16 September, at an event co-hosted by the Ministry of Social Affairs, Veterans and Youth Rehabilitation (MoSVY) and UNICEF.

According to a press release issued by UNICEF on Friday, the evaluation examined the Royal Government of Cambodia’s Action Plan to Prevent and Respond to Violence Against Children, which ran between 2017 and 2021. Speakers at the event included the Minister of Social Affairs, Vong Sauth, UNICEF’s Representative in Cambodia, Foroogh Foyouzat, and the Ambassador of Japan to the Kingdom of Cambodia, Mikami Masahiro.

“This evaluation of the Action Plan is very encouraging for the Government,” Minister Vong Sauth was quoted saying. “It shows that we are on the right track to ending violence against Cambodian children and demonstrates why all sectors of the Government need to continue working in a coordinated way to accelerate results. Supported by this evidence, Cambodia will continue to prioritize the safety of children in every setting, including homes, schools, communities and online.”

The press release states that ending violence against children has been a key development priority for the Cambodian Government for more than a decade. In 2013, Cambodia became the first country in the Asia-Pacific region to conduct a national survey on violence against children, which revealed that 50% of children had experienced physical violence.

These findings informed the development of the Action Plan, which was initiated in 2017 by a multi-sectoral coalition, led by MoSVY and managed through a Steering Committee, including representatives from 13 Cambodian Government Ministries and non-governmental partners including UNICEF and key NGOs. Other partners, including the Government of Japan, USAID and the Global Partnership to End Violence Against Children, were integral to the delivery of the Action Plan.

“This evaluation shows progress in certain areas, but there is still much more to be done, as is also noted in the Child Rights Coalition committee recommendations of June this year. Finalization of the upcoming child protection bill, and increased investment in the social welfare workforce and prevention programs, are crucial if we are to keep children safe and break the vicious cycle of violence that afflicts too many families."

The evaluation commended the effectiveness of the multi-sectoral approach taken to progressing the Action Plan, and found that Cambodia’s approach is well aligned with international standards and frameworks. It observed that a major factor in the Plan’s progress was sustained political will and Government engagement at a national and subnational level, alongside committed support from a range of development partners including UNICEF. At the launch, the Minister of Social Affairs confirmed that in the light of such progress, the Action Plan would be extended into 2023.

The evaluation did, however, also observe that the implementation of the Action Plan was still at an early stage and that more evidence needs to be collected on impact. This is a particular concern given that the Covid-19 pandemic occurred during the years of the Action Plan, and global studies have shown that this may have led to rises in violence against children. The latest figures from the Cambodia Health and Demographic Survey 2022 reveal that 43% of children report that they are disciplined in the home using physical violence.

A key recommendation of the evaluation was therefore to build robust results monitoring into all activities so that improvements can be measured more accurately in the years ahead, and best practice established. It is only then that we can achieve our common goal of keeping every Cambodian child safe and protected from any kind of violence. 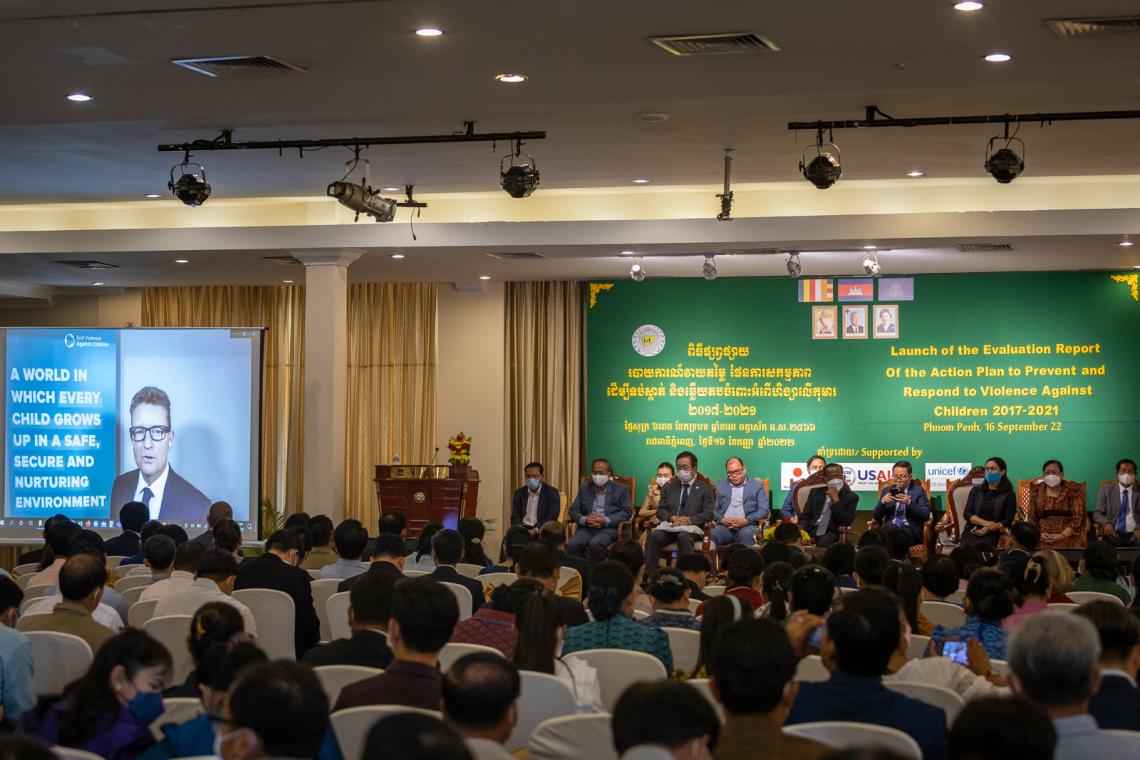