INTERNATIONAL: At least 51 migrants have died after being trapped inside a sweltering tractor-trailer truck found abandoned in Texas, authorities said on Tuesday, as two Mexican nationals tied to the unprecedented smuggling tragedy were charged in U.S. federal court.

The deceased migrants, 39 men and 12 women, most of them citizens of Mexico, were discovered on Monday in an industrial area on the outskirts of San Antonio, Texas, about 160 miles (250 km) north of the U.S.-Mexico border.

The incident marked the greatest loss of life on record from a human trafficking attempt in the United States, according to Craig Larrabee, an acting special agent in charge with the investigative arm of U.S. Immigration and Customs Enforcement (ICE).

Local authorities described finding the rear door to the trailer open with "stacks of bodies" inside, while others were strewn collapsed nearby. Some of the victims were hot to the touch, they said.

Two suspects identified as Juan Francisco D'Luna-Bilbao and Juan Claudio D'Luna-Mendez, both Mexican citizens, have been charged with possessing firearms while residing in the United States illegally, according to court documents and U.S. authorities.

A third suspect, described as a U.S. citizen who drove the truck, has also been taken into custody and was expected to be charged, but he remained hospitalized as of Tuesday evening, according to a Mexican official.

The truck had been left parked beside some railroad tracks as temperatures soared as high as 103 Fahrenheit (39.4 Celsius). Local authorities said there were no signs of water or visible means of air-conditioning inside the truck.

"It's unspeakable," San Antonio Mayor Ron Nirenberg said on MSNBC, noting that his community depends on migrants in the midst of a labor shortage. "It's a tragedy beyond explanation."

"Exploiting vulnerable individuals for profit is shameful," Biden said, vowing to crack down on multibillion-dollar criminal smuggling enterprises that have helped fuel a record number of migrant crossings at the U.S.-Mexico border since he took office in January 2021.

At least 27 Mexicans, three Guatemalans and four Hondurans were believed to be among the dead, according to officials from all three countries. There was no immediate information on the nationality of the other victims.

More than a dozen survivors were transported to area hospitals for treatment of heat stroke and exhaustion, including four minors.

At a press conference outside one hospital on Tuesday, Rebeca Clay-Flores, a local Democratic official in Bexar County, sharply criticized Republican Governor Greg Abbott for a tweet on Monday night blaming Biden's border policies for the incident even as the emergency unfolded.

"While bodies were still being removed, and others being taken to local hospitals, he chose to be heartless and point the finger," Clay-Flores said.

The truck may have been carrying around 100 migrants, but the exact number remained unclear, according to local and federal law enforcement officials briefed on the investigation.

It appeared the migrants had recently crossed the border and were picked up by the truck to be taken to where they would work, according to a Mexican official, a U.S. Customs and Border Protection (CBP) official and another U.S. official, all of whom requested anonymity to discuss the matter.

Authorities were alerted to the truck through an emergency-911 call from a passerby flagged down for help by a migrant who had escaped from the truck, the officials said.

The victims were found sprinkled with a pungent substance, officials said, a practice some smugglers are known to use to mask the scent of human cargo and evade canine detection.

San Antonio's police chief, William McManus, on Monday said a person who works in a nearby building heard a cry for help, came out to investigate, found the trailer doors partially opened and saw a number of bodies inside.

The surviving migrants will likely be released into the United States to pursue asylum or other forms of humanitarian relief, the CBP official and two other law enforcement officials told Reuters. Some survivors of human smuggling in the past have been taken into U.S. custody to testify as witnesses. read more

The deaths highlighted the challenge of controlling migrant crossings for Biden, a Democrat who came to office pledging to reverse some of the hard-line immigration policies of his Republican predecessor, Donald Trump. Republicans have criticized Biden's border strategy ahead of the midterm congressional elections in November.

In July 2017, 10 migrants died after being transported in a tractor-trailer discovered by San Antonio police in a Walmart parking lot. The driver was later sentenced to life in prison for his role in that smuggling operation.

"I'm so tired that we have been here before, that we have done this before. It shouldn't be this way," Jessica Azua, a community organizer, told the crowd, recounting how she herself lost consciousness when she was brought to the United States at age 14 in the back of a tractor-trailer. 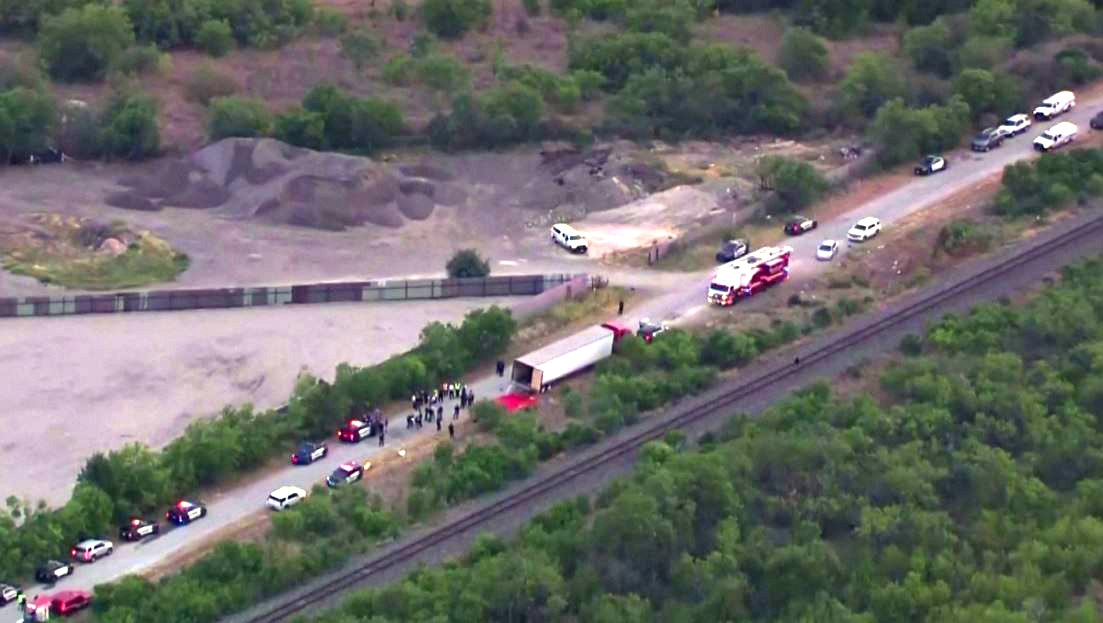 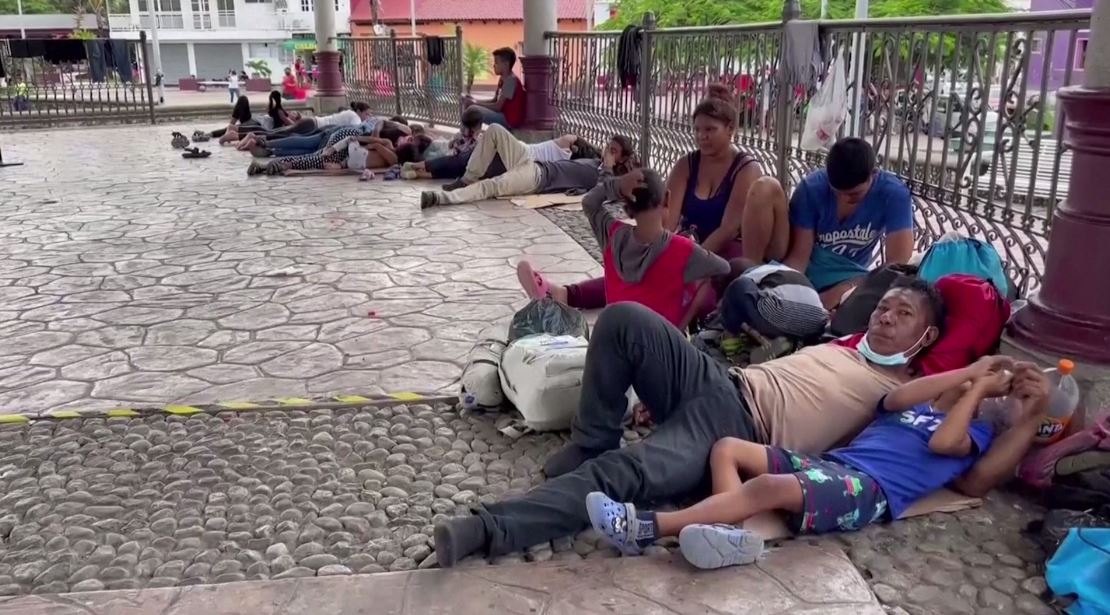 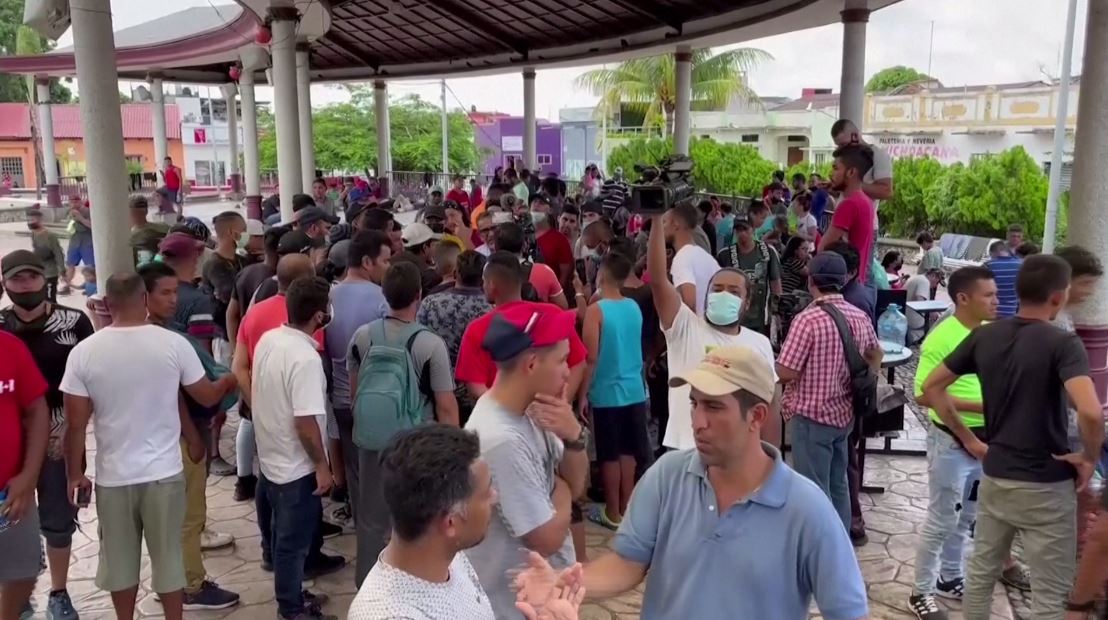