PHNOM PENH: The Minister of Foreign Affairs and International Cooperation and Special Envoy of the ASEAN Chair on Myanmar, DPM Prak Sokhonn, will lead a delegation to pay a second working visit to the Republic of the Union of Myanmar from 29 June to 3 July 2022.

According to a press release issued by the Ministry of Foreign Affairs and International Cooperation, DPM Prak Sokhonn will be accompanied by the Deputy Secretary-General of ASEAN for ASEAN Socio-Cultural Community (ASCC), Ekkaphab Phanthavong, a number of senior government officials, as well as staff from the ASEAN Secretariat (ASEC).

The second visit of the Special Envoy to Myanmar aims to follow up on the progress of the implementation of the ASEAN Five-Point Consensus (5PC) and the outcomes of the Consultative Meeting on ASEAN Humanitarian Assistance to Myanmar, which was held on 6 May 2022 in Phnom Penh, as well as to contribute to building an environment conducive to inclusive political dialogue through meetings with all parties concerned.

The Special Envoy of the ASEAN Chair on Myanmar paid his first visit to the Republic of the Union of Myanmar from 21-23 March, which he said was a visit to learn about the current situation in the country, the positions of different stakeholders and to also listen to the request of the Myanmar side.

Speaking at a press conference after his first visit to Myanmar, DPM Prak Sokhonn assessed the results of his visit to be quite good.

He also confirmed that he had met with Senior General Min Aung Hlaing and other relevant stakeholders.

In particular, he met with Ko Ko Chi, a prominent figure in the revolutionary youth group, who gave a lot of good ideas because he knew both sides of Myanmar, military and civilian, and provided valuable knowledge and advice that will help further work.

The ASEAN 5PC was agreed upon in April 2021 in Indonesia. The five points of consensus include: the cessation of violence, the organization of constructive dialogue among stakeholders, the delivery of humanitarian aid, the appointment of special envoys to facilitate talks, and the allowance of ASEAN special envoys to enter the country. 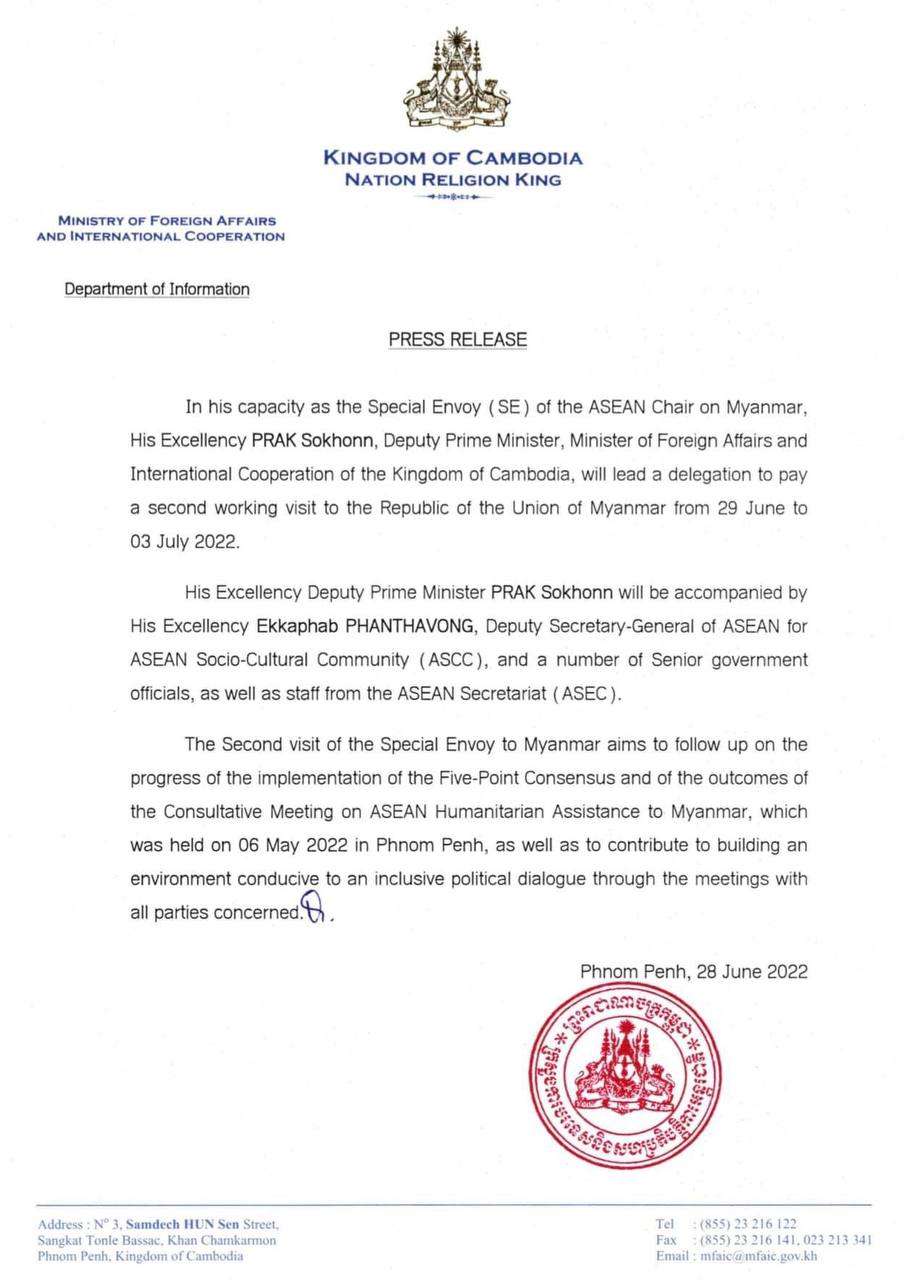 PM Announces He Will Not Close City or Country Again