BREAKING NEWS:​ The CPP is Committed to Implementing its Policies for the Benefit of the People

PHNOM PENH: After the National Election Committee (NEC) announced the official results of the 5th Commune/Sangkat Council Election showing that the Cambodian People's Party (CPP) won with a landslide victory, the CPP has declared its commitment to successfully implementing its policies to serve the interests of the people at all levels.

The CPP released an official statement on Sunday, 26 June, regarding the results of the 5th Mandate Commune/Sangkat Council Election held on 5 June 2022, saying that the election “was held in accordance with the Constitution and the laws of the Kingdom of Cambodia and was free, fair and just in a neutral environment [with] security, order, non-violence and without intimidation.”

More than 80% of registered voters exercised their rights and obligations by going to the polls in large numbers to vote for the representatives they wished to lead the commune from 2022 to 2027. The party state that this election reflects the maturity of the democratic process in Cambodia, especially at the grassroots level, and also shows the success of Cambodia’s recovery process from the Covid-19 crisis, “scoring new achievements in socio-economic development” as Cambodia continues to enhance its international prestige especially as the current 2022 ASEAN chair, and as the host for the forthcoming 32nd SEA Games in 2023.

In the statement, the CPP declares that it officially accepts the results of the 5th term Commune/Sangkat council election announced by the NEC, and believes that the election results reflect the will and intuition of the people, who voted with high hopes for the development of their villages, communes, and the improvement of their lives, “while rejecting lies, incitement, and deceptions to distort the truth of the extremist opposition, and some ill-willed circles who always hinder the development of Cambodia.”

The party extends its deepest gratitude to its supporters in all communes across the country, saying that this victory shows that the people voted for peace and development, and adding that this win has helped the CPP strengthen its chances for a victory in the upcoming 7th National Assembly election in 2023. The CPP also commends the NEC, the Capital/Provincial Committees and the Commune/Sangkat Election Committees “for fulfilling their duties in an independent, neutral, impartial, transparent and fair manner,” and expresses its “appreciations to the Royal Government, local authorities and competent forces at all levels for their active support of the election process.”

The party further extends its profound thanks to all national observers from all political parties, associations, NGOs and other circles, as well as international observers who closely monitored the voting process in action, and assessed that the election was held in a free, fair and just manner.

The CPP affirms that it will successfully implement its policies to maintain peace, stability, security and social order to improve the provision of public services, increase social protection for the poor and vulnerable, and develop communes in all fields to meet the aspirations and interests of all people at the local level.

The party calls on all citizens, irregardless of which party they support or if they went to vote in the recent election, to continue to unite under the Constitution and under the shadow of His Majesty the King of Cambodia, to uplift solidarity around the Royal Government led by Prime Minister Hun Sen, in order to continue maintaining peace, protecting social achievements, and developing Cambodia towards a bright future. 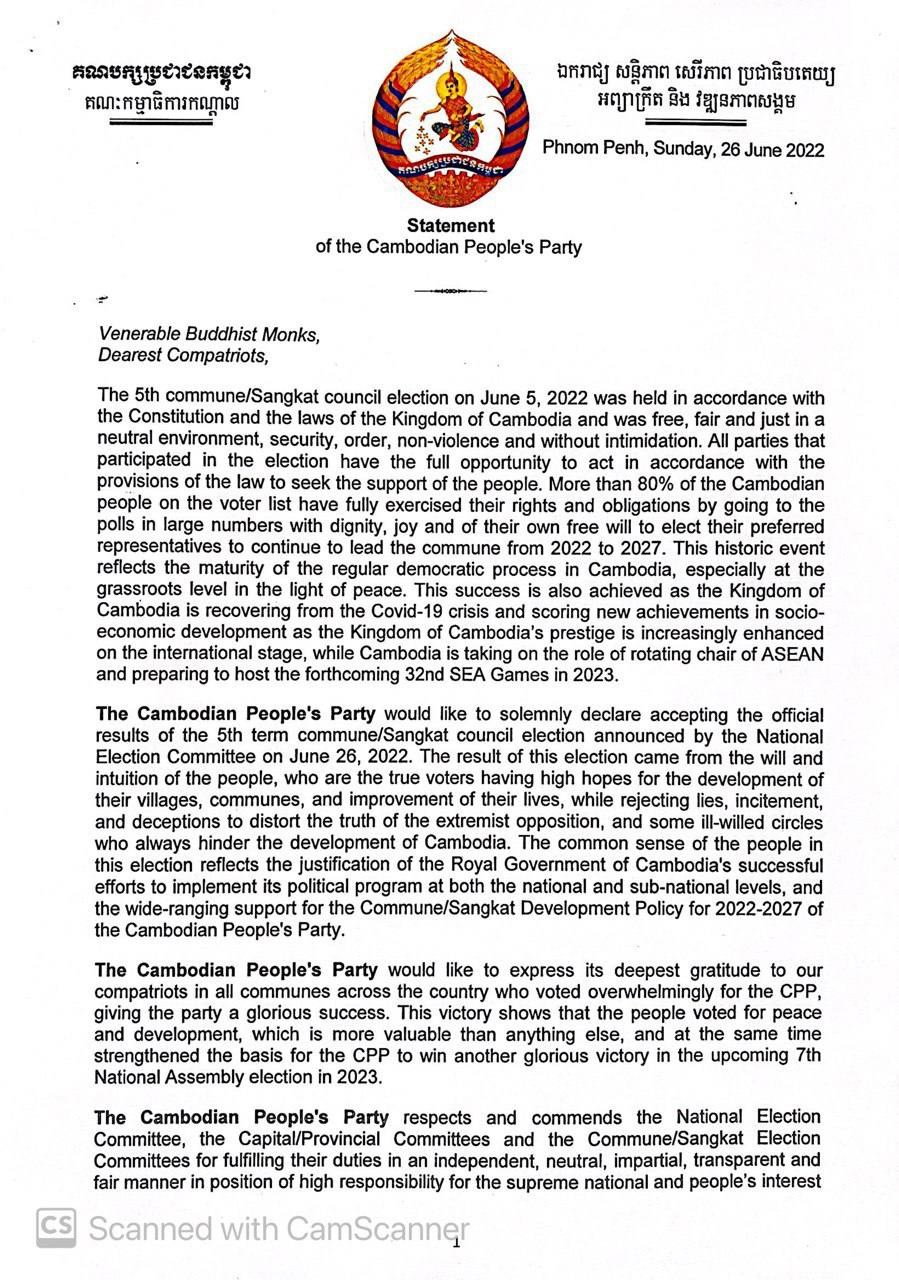 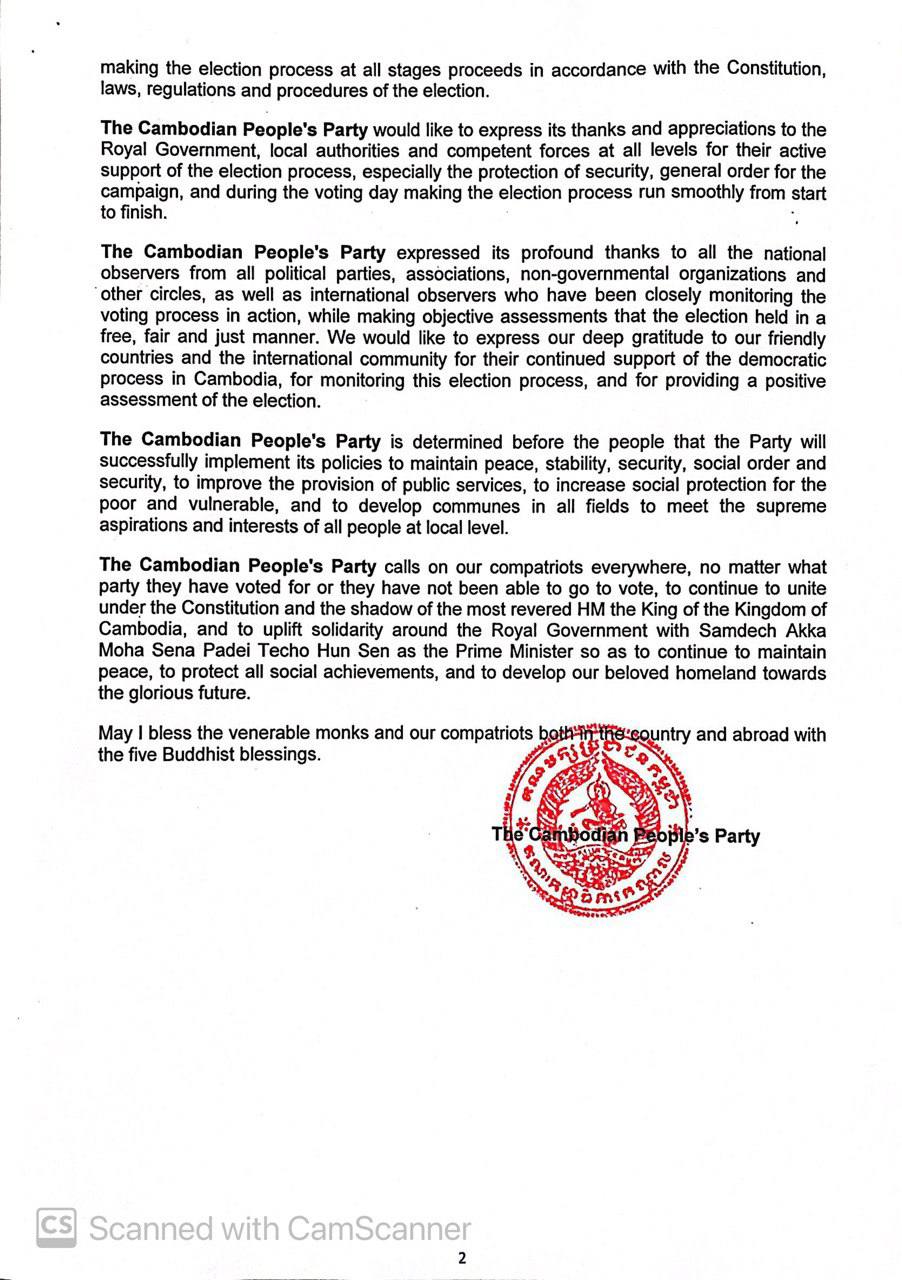