55 Years of Relations, Cambodia-Vietnam Continue to Be Good Neighbors

PHNOM PENH: This Friday, 24 June, 2022, marks the 55th Anniversary of the Establishment of Diplomatic Relations Between Cambodia and Vietnam. The King of Cambodia, His Majesty King Norodom Sihamoni, has expressed his pleasure over this strong relationship, and has said that for more than five decades, the two countries have maintained good and trustworthy neighborliness.

In the Royal Decree signed on 21 June 2022, the King of Cambodia stated that Cambodia and Vietnam have enjoyed cordial bonds of traditional friendship and close cooperation in all dimensions over the last five decades based on the “spirit of good neighborliness, solidarity, mutual trust and understanding”.

His Majesty further wrote, “The celebration of the 55th Anniversary of the Establishment of the Diplomatic Relations will bring us the memories which we extended to each other in the past for the cause of national liberation, unification, independence and development and will further enhance the sentiment of solidarity and close cooperation for the shared prosperity of two nations, the ASEAN family and the world at large.”

Cambodia and Vietnam established diplomatic relations on 24 June, 1967, as a show of support and solidarity against foreign aggression.

Prime Minister Hun Sen sent a letter to the Prime Minister of Vietnam, Pham Minh Chinh, congratulating Vietnam on maintaining friendly relations with Cambodia, and expressing his belief that diplomatic relations between the two countries will only be strengthened going forward.

The Prime Minister wrote, “Having gone through a long time of hardship for the cause of national liberation, unification, independence and development, I strongly believe that Cambodia and Vietnam will continue to deepen our traditional bonds of friendship, long-lasting relations and comprehensive cooperation in many different areas at bilateral, regional and international fora in the coming years, which in turn contributes to the maintenance of peace, stability, and sustainable development of the ASEAN Community and the world at large”.

Addressing the 25th Anniversary of the Day of Remembrance of the Journey to Overthrow the Pol Pot Genocidal Regime at the historic Koh Thmor X16 Military Site in Tbong Khmum Province, the Prime Minister of Vietnam stated that despite facing many obstacles, Cambodia-Vietnam relations are still good and solidarity between the two countries has grown even more, especially during the Covid-19 crisis.

He added that he considers Cambodia a good brother to Vietnam, and said the two countries have helped each other in the past, which led to the escape from foreign aggression and the overthrow of Pol Pot’s genocidal regime in Cambodia. He also thanked Cambodia for helping Vietnam gain its independence.

Vietnam gained independence from France on 2 September 1945. However, due to the effects of the Cold War in the 1950s, the country became divided into the communist regime of North Vietnam, allied with the Soviet Union, and South Vietnam, allied with the United States. With the help of Prince Norodom Sihanouk, North Vietnam was given permission to utilize Cambodian territory in the fight for national unification, which allowed the North Vietnamese army to conquer and occupy South Vietnam and reunify the nation on 30 April 1975.

At the end of 1978, Vietnam sent its volunteer troops to join the Kampuchean United Front for National Salvation to overthrow the Khmer Rouge genocidal regime, enabling Cambodia to guarantee the right to life, which was the starting point for national development until today. Since then, the relationship between the two countries has become stronger and closer. 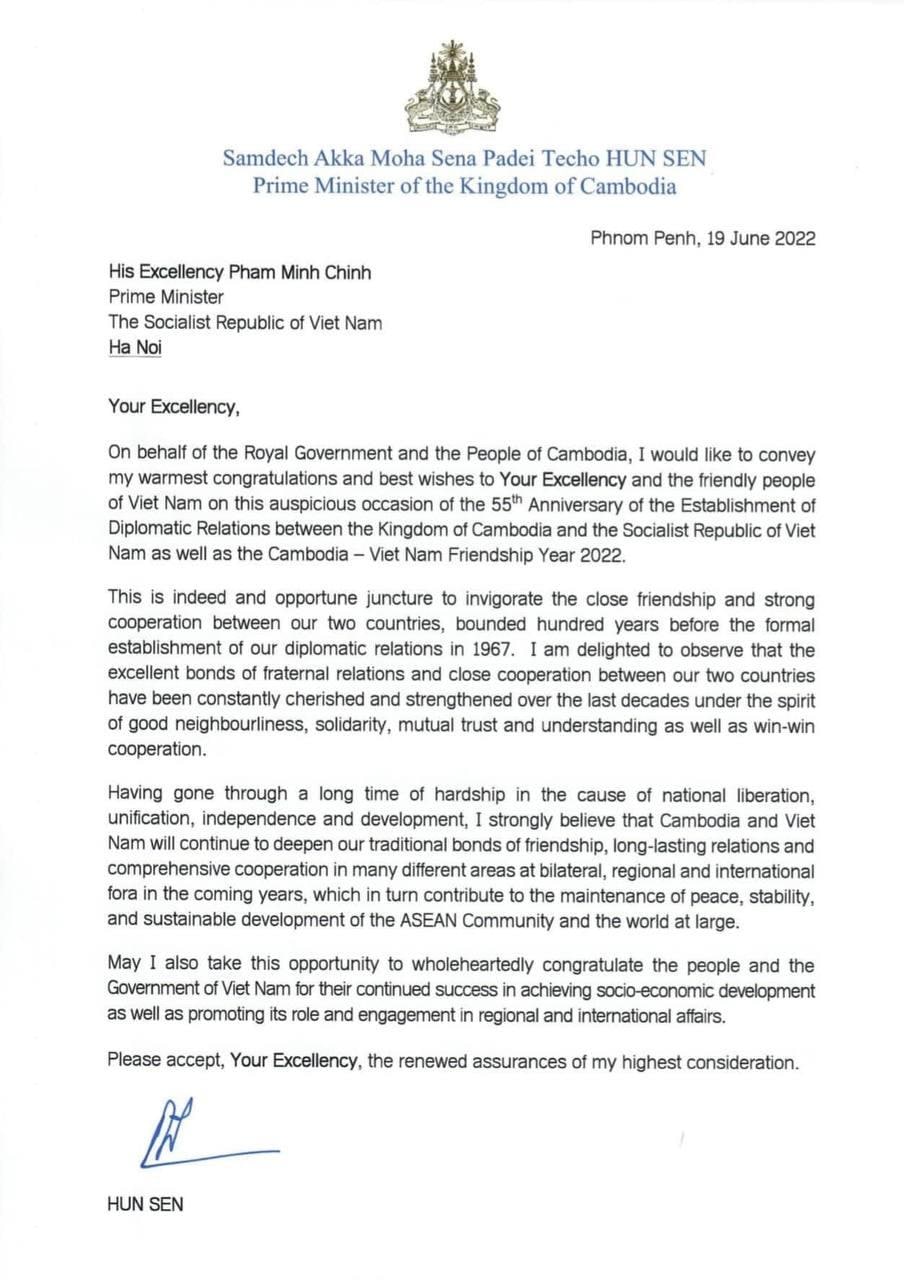 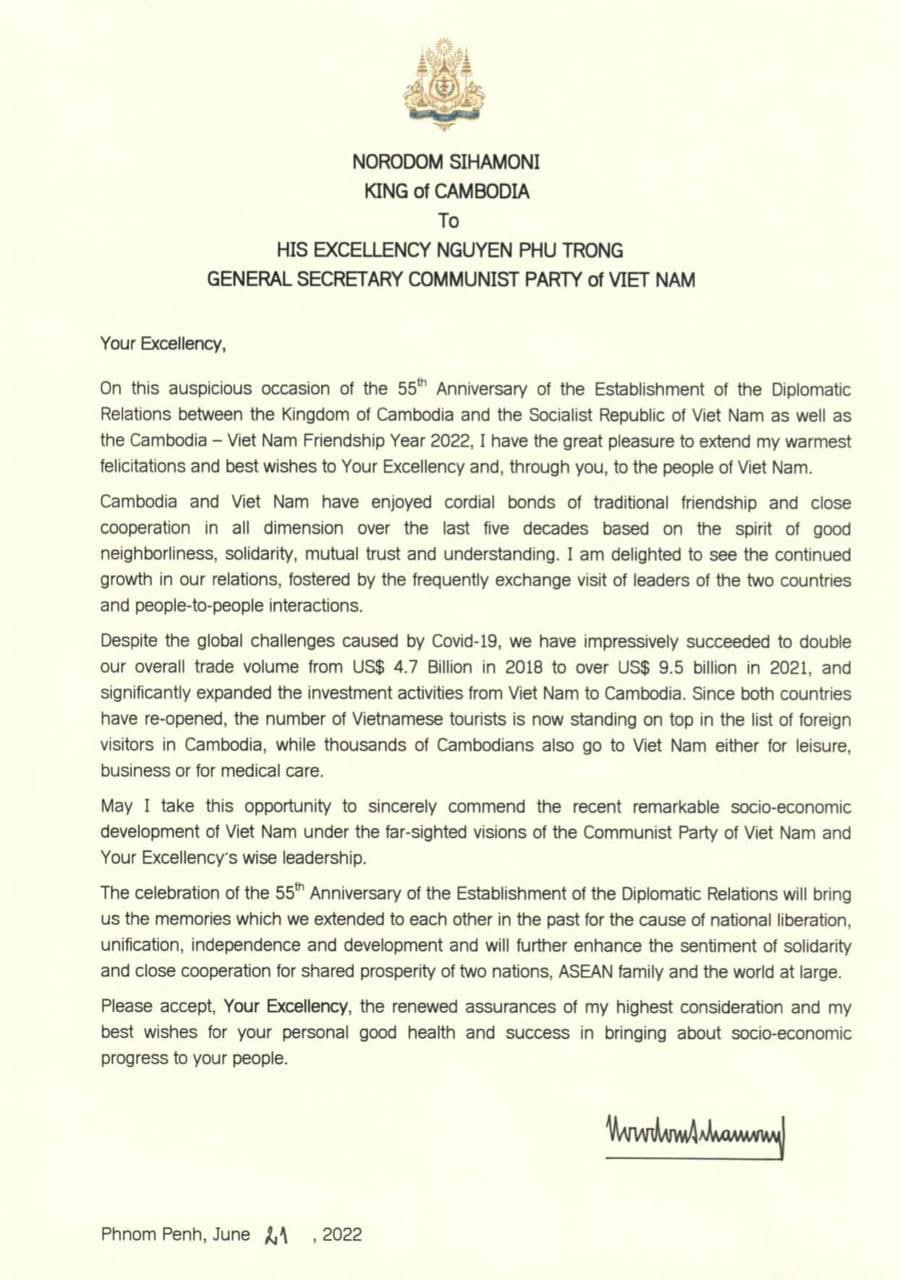 PM: Opposition groups always take people who break the law and violence as their heroes

Chinese Ambassador: As Long as China and Cambodia Join Hands, There are No Difficulties That Cannot…