PHNOM PENH: Hyatt Regency Phnom Penh and Tribe Art Cambodia are hosting their third joint cultural event with Nak Noy’s first solo art exhibition in Phnom Penh this Friday, 24 June. Let’s get to know him, his art, and a little bit about his beginnings to see what inspires him.

Nak Noy is a promising young Cambodian artist whose work has always embodied a dreamlike escapism. He welcomes the viewer to abandon reality for new realms. Nak Noy’s unique style stems solely from his imagination. Born and raised in Siem Reap, Nak Noy began making art when he was little and first saw his sister’s drawings. Instead of focusing on drawing forests like his sister, Nak Noy thought, why not draw forests out of people? Thus, his creativity was unleashed. Nak Noy did not have access to many resources, so he had to save his own money to buy art supplies as his parents were not supportive of him pursuing an artist’s career at the time.

When he was little, on his way from home to school he would take a particular road next to a pagoda where he would see people painting murals, which helped spark his inspiration. He would stop to watch them paint for hours and ask questions.

Nak Noy said, “It was a big inspiration for me. I stand there sometimes, staring, spending hours to just watching what they were doing. I forgot his name but he was nice to me [by answering all my questions]. He said that you’re going to be a good artist if you really like art. He encouraged me to draw.”

Although he never received formal training, the first time Nak Noy considered himself a professional artist was when he sold his first drawing for $100 at age 15. His artworks now range from $35 to $10,000 for paintings on 2 meter by 2 meter canvases.

Some of Nak Noy’s intricate artworks from 2018 will be showing in the exhibition on Friday as well. He said that back then, there were people who would offer him only $50 for his artwork that he would spend over six weeks creating. However, now people finally see the great amount of detail, care, and hard work that he puts into making his art.

He is currently in his first year of the visual arts course at Phare Ponleu Selpak in Battambang province. He began his artistic journey with color pencils, pens, water colors, and now works also with acrylic. Although most of his current works are acrylic on canvas, his favorite medium is still water colors because he can stop and pick up the work anytime he wants. He said working with acrylic is harder because he needs to take proper care of the brushes as acrylic paint dries out and hardens. However, he still does most of his work with acrylic now as he said it is hard for him to ship his watercolor artworks in frames.

Most of Nak Noy’s current clientele are foreigners, but he hopes to break into the local market as well. Although his surrealist art may not be what locals are used to seeing, a Khmer artistic sensibility is still present in his paintings, inspired by things like traditional Khmer jewelry, intricate costumes, and architecture. His works are layered with metaphors and symbolism and are constantly evolving. His signature style, however, is still very recognizable, making his work highly collectable and featuring out of this world human-like creatures in costumes, headdresses, and other embellishments.

Common recurring themes in his work include strong women and female empowerment, as he gains a lot of inspiration from the strong women in his life, especially his mother and sister. At the exhibition on Friday, viewers can see portraits of his mother, the King Father of Cambodia, or even his own self-portraits. He explained that one of his artworks was entitled “Sisters,” and was inspired by two Khmer Muslim girls who were being bullied for wearing hijabs. He decided to depict them in his painting with the hope of empowering them, as well as to stop religious divide and discrimination.

At first, Nak Noy did not want to show his artwork, but the more he continues to create, the more he thinks his work needs to be seen. In the future, he hopes to open his own art gallery.

He said, “I used to only thinking to create art but not show people at all. But at some point, it felt like it deserved to shown, deserved to be seen somewhere because I think people can judge it. People can have opinion on it. So I might improve...I always tell myself that I’m artist since I was young because I have to have my own vision. My own plans ahead [to have my own gallery.] So I could go for it. So yeah we need to have plans.”

The opening of Nak Noy’s “Kingdom” Art Exhibition will take place at the Hyatt Regency Phnom Penh on Friday, 24 June, from 6:30 to 8:30 pm. Entrance to the exhibition will cost $55 per person. The event will feature new works, interactive art, live painting, free flow canapés and drinks, and special guest DJs. For one night only, everyone who attends this event will also receive 20% off for all of their art purchases. The exhibition will run for about six weeks.

Nak Noy has shown that no matter how little resources you have as long as you have the ambition and passion you can accomplish anything you want. Congratulations Nak Noy on your first solo exhibition. 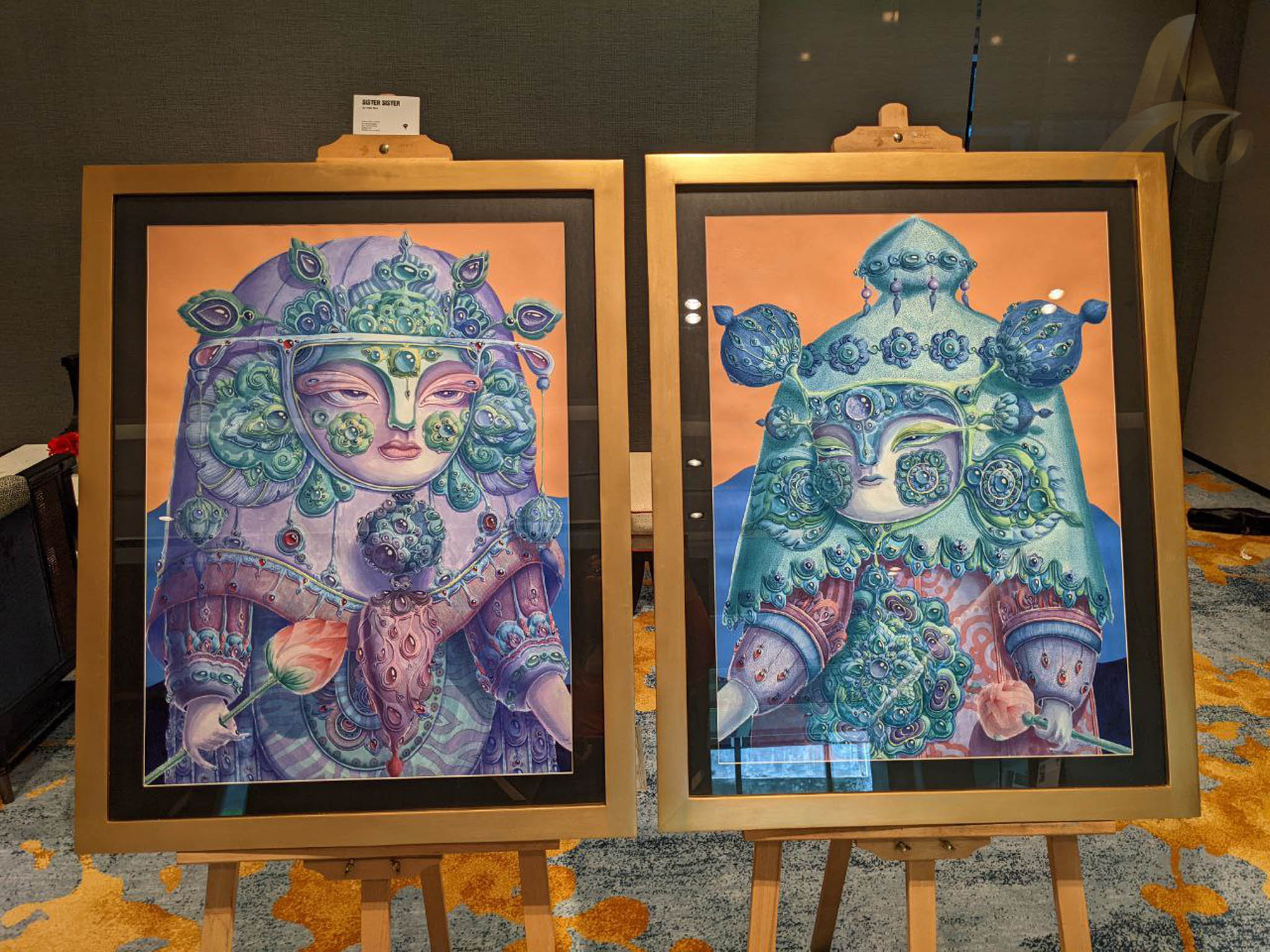 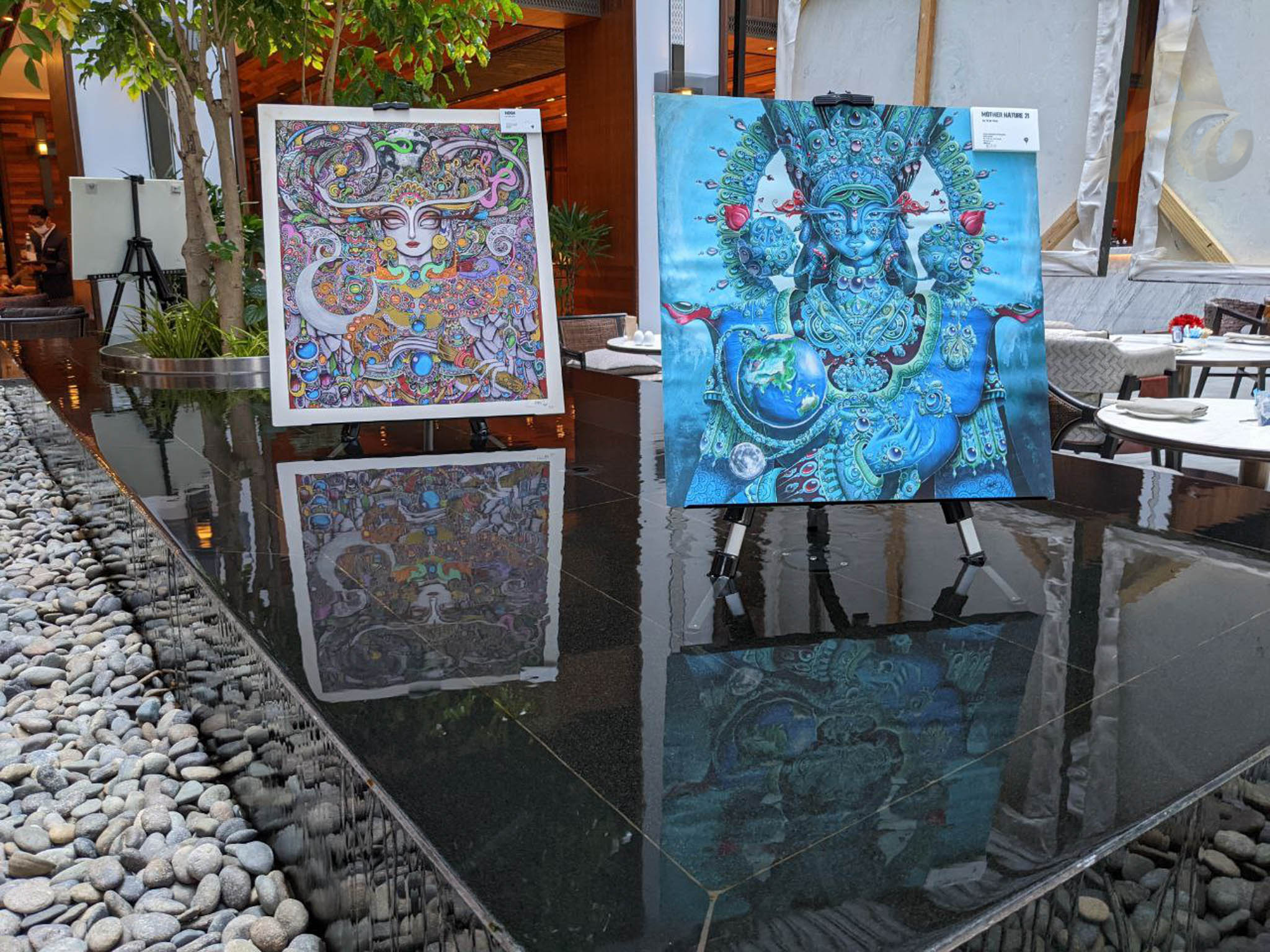 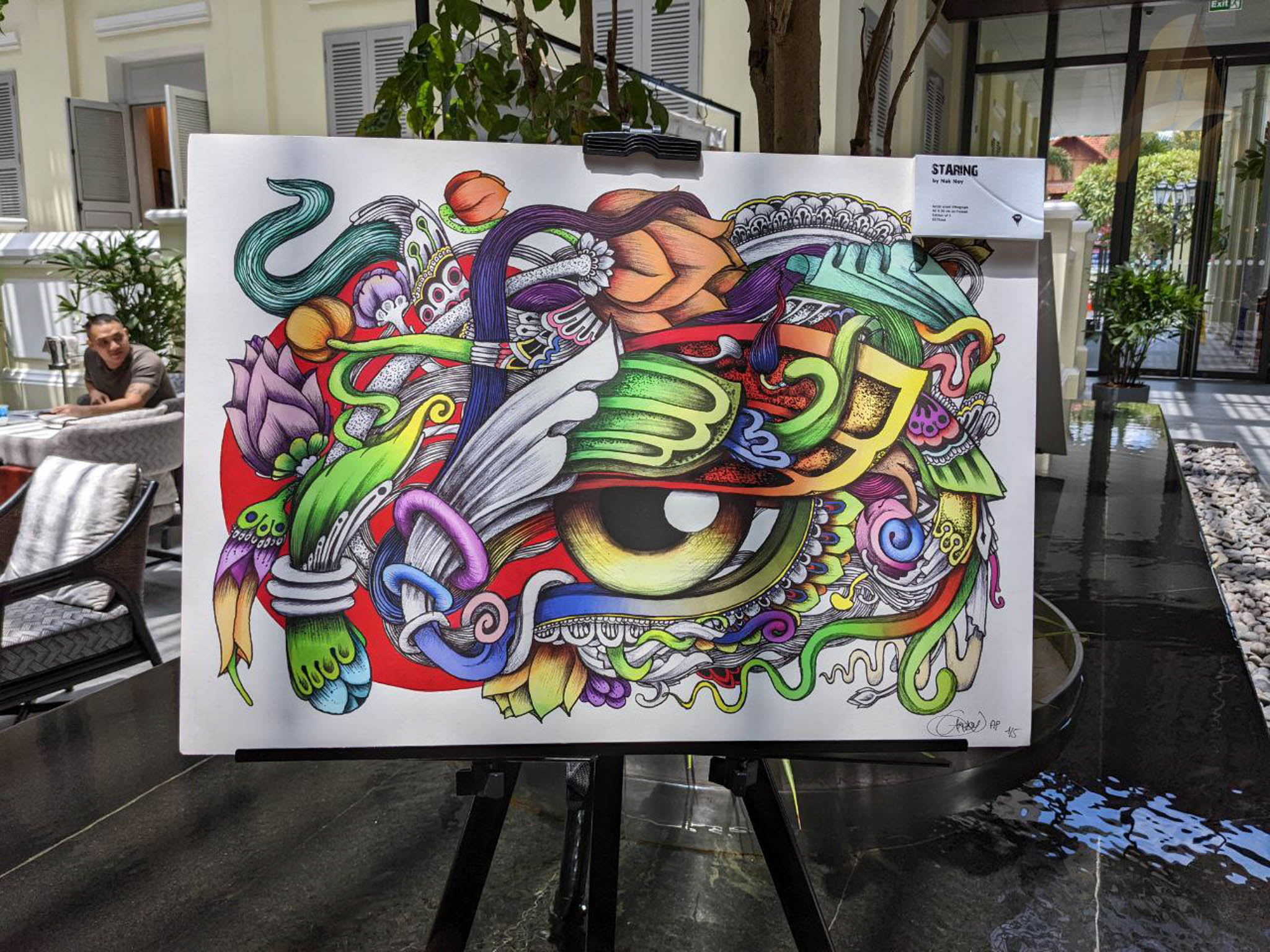 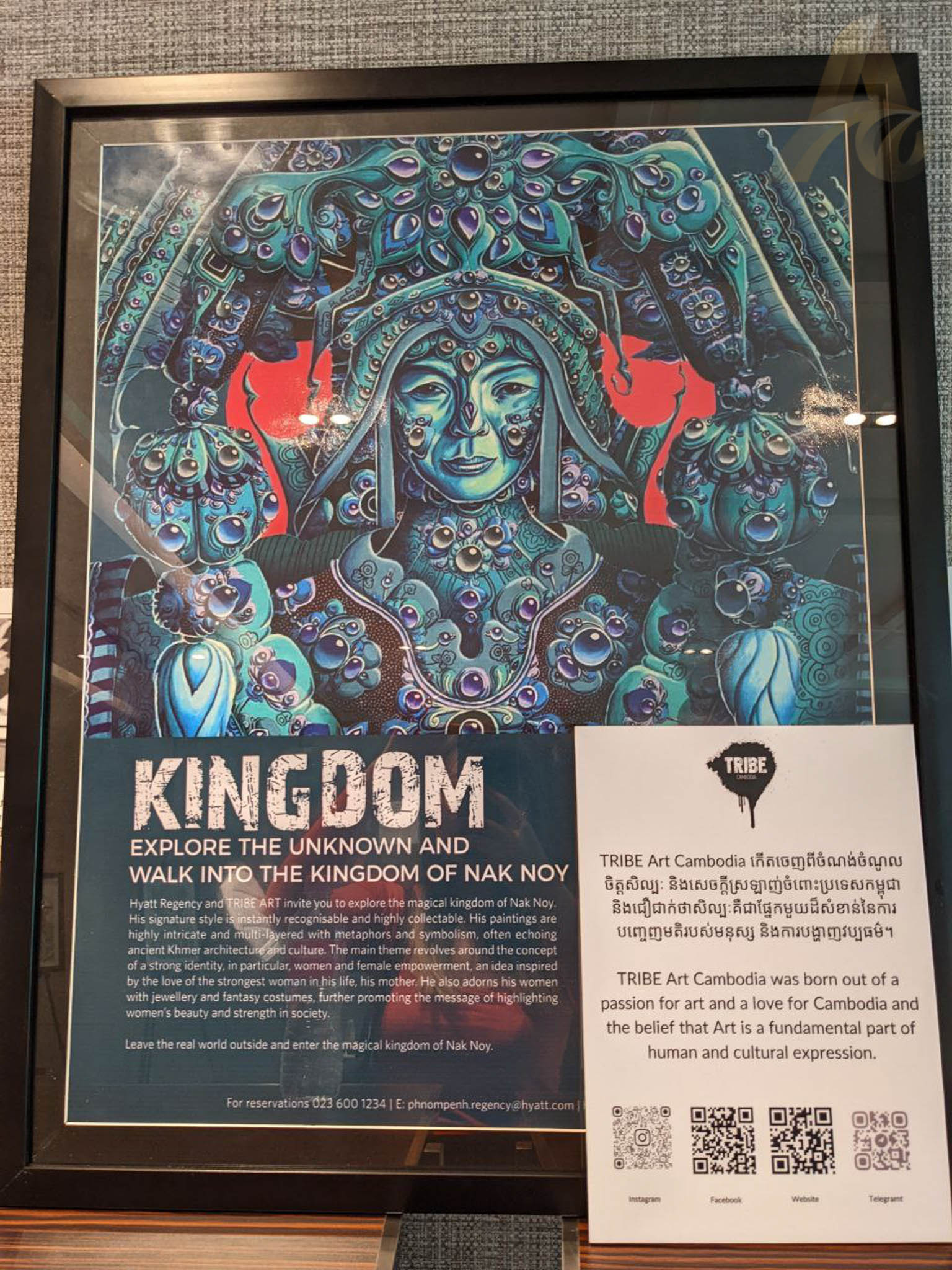 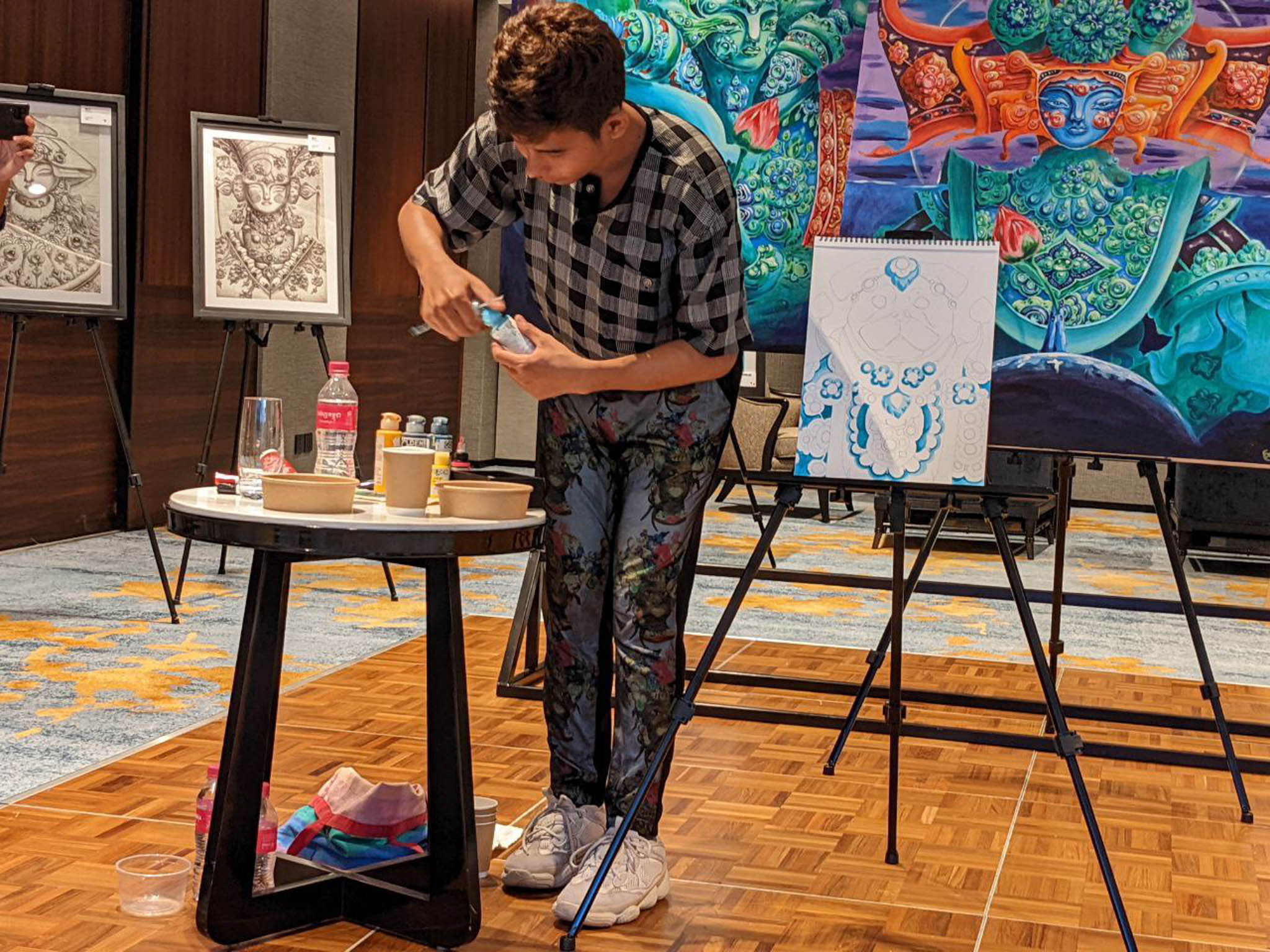 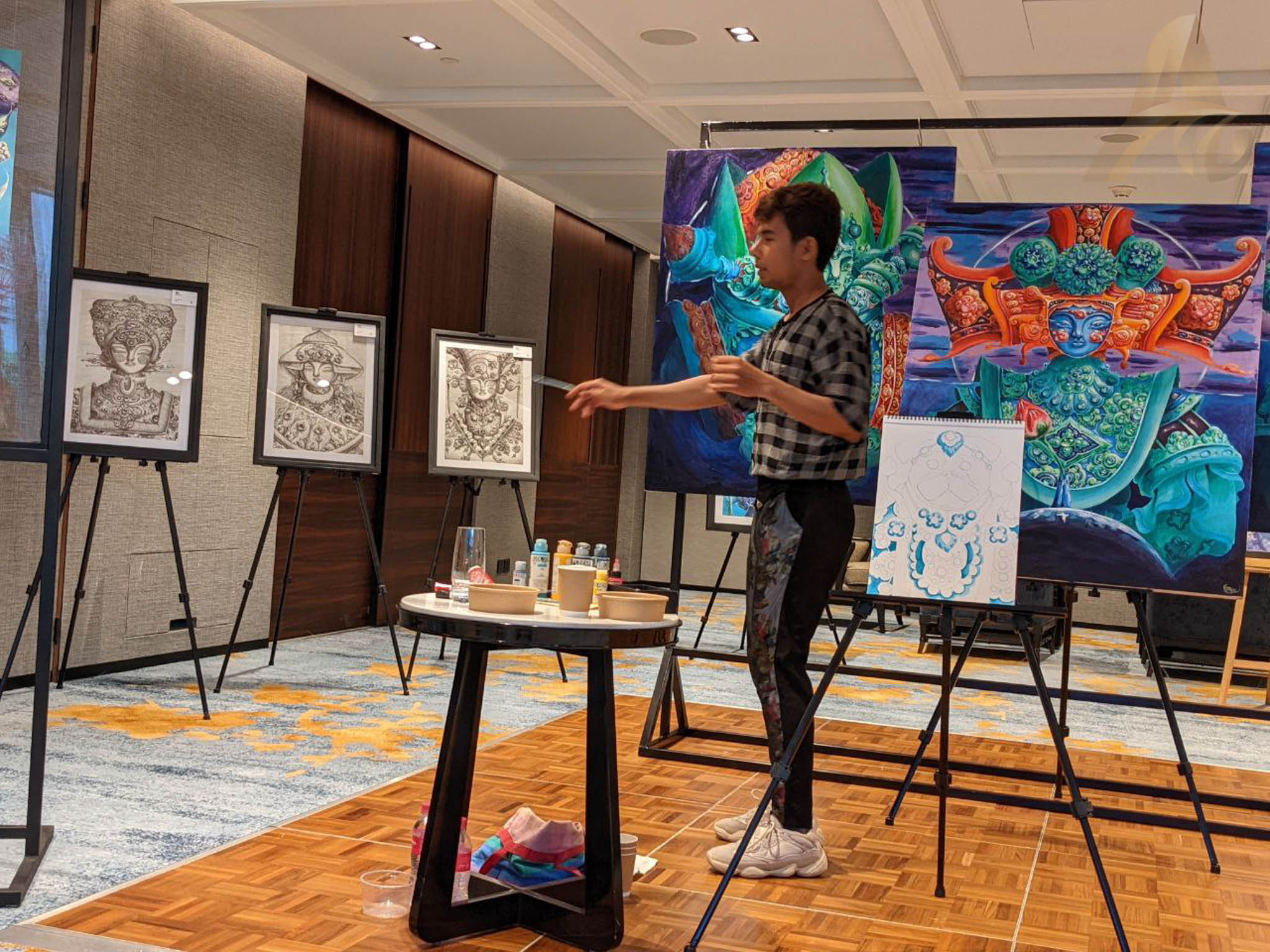 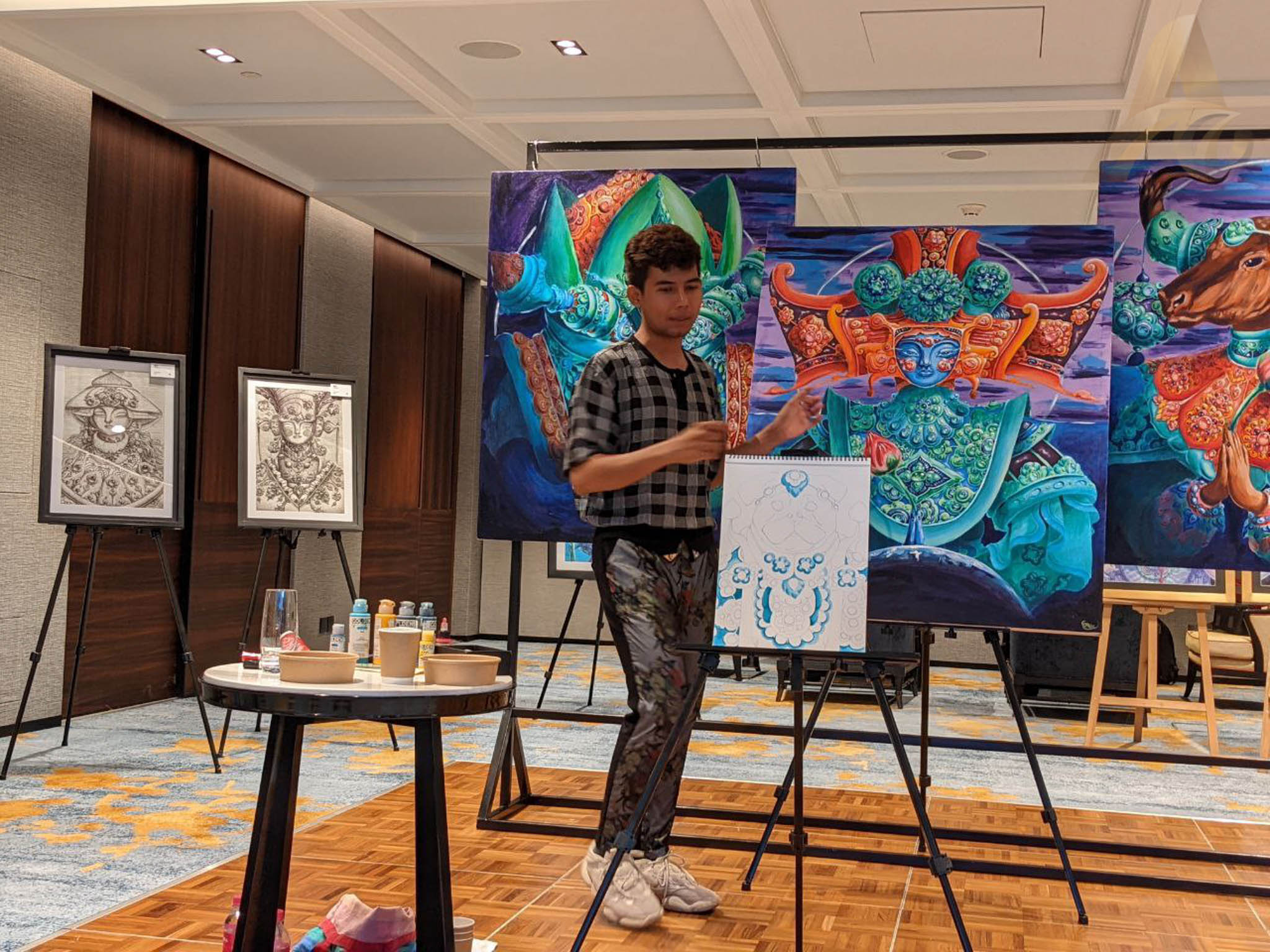 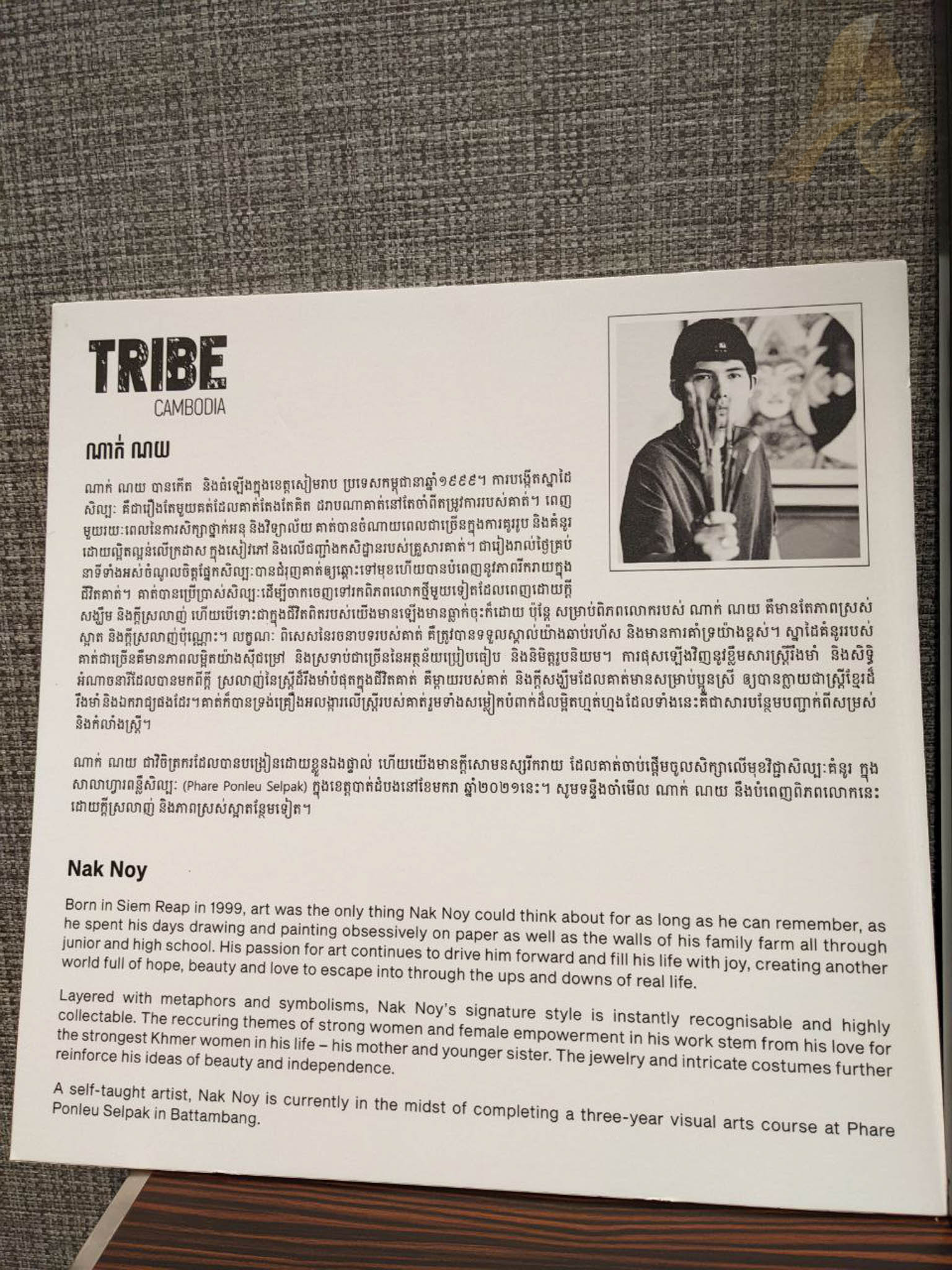 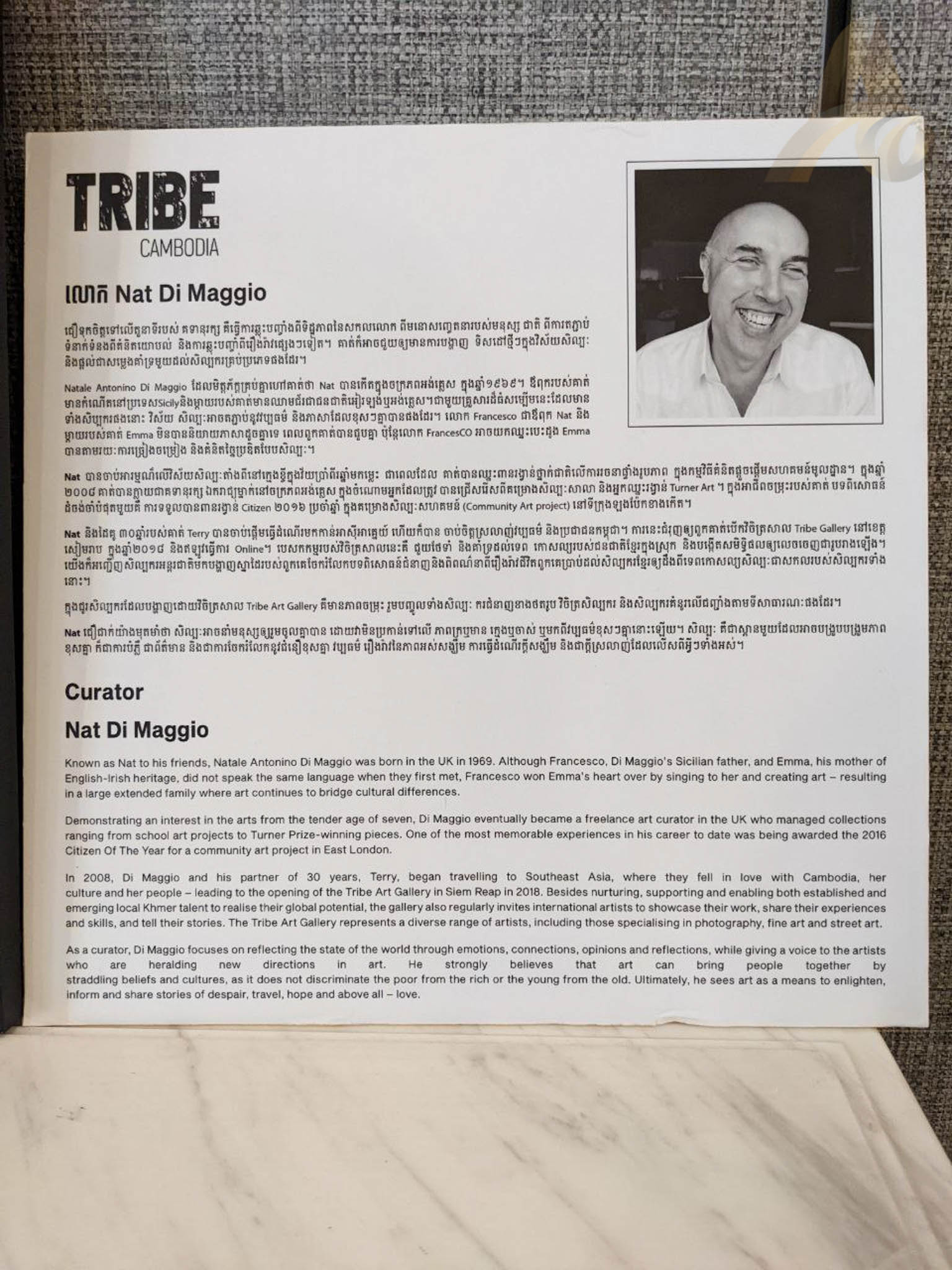